They say legends are born in May. Well, may not be true to all, but consider Oliver “Olabs” Labastida who traveled half of the globe and counting.  He currently work 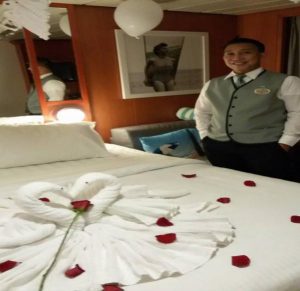 as a stateroom steward of a NCL Freestyle Cruising a Norwegian Cruise Ship Company that caters to tourist of different nationalities who wants to travel, sight see and enjoy visiting tourists sites in Europe and America through the seas.  Oliver or Olabs to his friends, is an HRMT trained and graduate of Carmelo de los Cientos, Sr. National Trade School on 2005 with NCII qualifications.  He further hone his skills in the following areas: housekeeping at radiance hotel Davao, gallery assistant cook and Steward at Chippens Restaurant Davao, an on call waiter for a year at Hotel de Crisbelle Digos City and finally a housekeeping / steward at Grand Boulevard Manila.  All these experiences made in local tourism industry helped Olabs equipped himself allowing him to confidently try his luck in the international arena.

Since 2008 up to the present, he is still connected with the Norwegian Cruise ship as utility officer promoted to Junior Stateroom steward and currently awaits for the next promotion. One of the lucky  Carmelonian as he say, where achievement are honed and skills becomes weapon to reach the desired goals. And oh by the way, Olabs is born on May 4, 1984.  CCNTS is really proud of you! 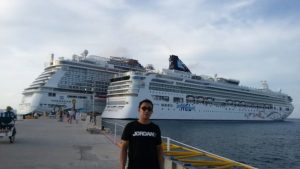