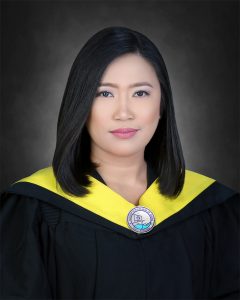 Since her parents separated, her mother struggled to make ends meet. Her mother had to left her in the care of her grandmother in order for her to work in Davao City. “Didto siya nagtrabaho para naa siyay pambayad sa mga bayrunon sa skwelahan (She worked there so that she could have enough money to pay for my school fees),” she said.

Adjusting in her newfound environment was hard for her. She had to adapt quickly and be mature a such a young age. “Murag gina search nako ang love sa family (I was searching what it feels like to have a loving family),” she added.

Eventually, her aunt decided to accept the responsibility on financing her education from elementary to high school. Her stay with her aunt proved to be the first challenge in her life. Since her aunt owns a carinderia (food stall), she had to clean and to help her aunt run the carinderia before going to school. She had to immediately go home to do the household chores in her aunt’s house. “Mao to siya ang routine nako every day. Wala nako na enjoy akong pagkabata (That was my routine every day. I did not have a chance to grasp the joy of being just a child),” she said. 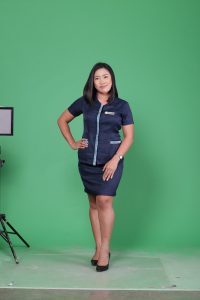 When she was about to finish high school, she was hesitant to go to college because of financial reasons. Her aunt stopped to finance her tuition and other miscellaneous fees in college. Because of this, she had to find a way for her to finance her college education. “Nidagan ko ug SK Kagawad. Pag SK Kagawad ka, automatic nga naa kay scholarship. So ako siyang gi-aplayan (I ran for SK Kagawad in order for me to continue to go to college. If you are an SK Kagawad, you have an automatic scholarship from the government),” she explained.

However, SK Kagawad only has two terms of service. Dia can no longer avail the scholarship and her future of continuing her college journey was halted. “Nakita nalang nako akong self sa isa ka corner sa room, nagsulat ko gi address nako kay God. Nagsulat lang ko kay Lord nga di ko gusto dire nalang ko kutob (I saw myself in the corner of the room, writing a letter to God. I just wrote to God that I don’t want to my life to be like this for the rest of my life),” she said.

Determined to make something out of herself, she grabbed the opportunity to enroll and study a vocational course. “I applied for a scholarship under the Local Government Unit because my cousin works there,” she added. Dia studied Computer System Servicing NC II. The course was 6 months in duration.

Dia spent her OJT at the Regional Office of TESDA. After spending her OJT, the management decided to hire her because of her good performance. She officially started working at TESDA on November 4, 2013.

“Naay gipabuhat na report sa akoa. Kailangan ko mag backtrack ug 5 years para sa report. Tapos after 3 months, gipanagayo ang report. Unya naa man nay mali. So kailangan usabon. So, wala siya naapas sa deadline (I was tasked to make a report. I need to backtrack the papers 5 years prior to the present time. After 3 months, the admin needed the report. I did not know that there was an error in the report. So, I needed to correct the error and it required a lot of time. In short, I was not able to submit the report on time),” she said. 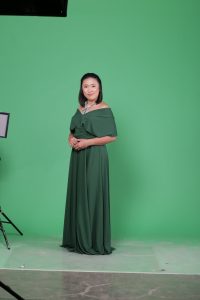 That experienced made her determined to continue studying and reinvent herself. She decided to take up Bachelor of Science in Business Administration Major in Human Resource Management and Development at the Assumption College of Davao. Currently, she is due to graduate this April 2019.

Asked whether if there was a time she experienced discrimination and almost gave up in life, she admitted that there were countless of times she taught she wouldn’t make it. “Naay times na gusto nalang ko mawala ug kalit. Kanang naningkamot raman ko. Ngano palisudan paman ko? Naay uban naga ingon nga unsa raman gud daw na ang vocational. Basin dili ra gihapon ko ug dawaton kay tungod vocational course lang akong nahuman (There were times that I just want to disappear and leave everything behind. I just want a better future for myself. Why is it so hard for me to reach my dreams? Other people are also skeptic against vocational graduates. They said that vocational graduates cannot land a good job because it is not a Bachelor’s Degree),” she said.

Amidst the struggle, Dia is grateful for the life she had lived.  “Gusto lang nako ingnon sa uban nga trust lang jud mo kay Lord. Pag trust lang jud mo sa Iyang plano kay dili mo Niya pasagdan. Paningkamot lang jud mo kay mag pay off rana sa future. Katong mga difficult experiences nimo kay mao to ang mag fuel sa imoha para maningkamot (I just want to say that just trust in the Lord. Trust His plan for you because he will not forsake you. Just continue to hustle because it will just pay off in the future. Those negative experiences that you have will fuel you to be better and to aspire more),” she said.

Her story proves that despite the hurdles and roadblocks that come your way, just continue to have the faith and strength to continue living by God’s grace. Dia is an epitome of woman who embodies resiliency, perseverance and hustling hard. In this year’s Women’s History Month, let us acknowledge all women, who like Dia, hustled hard for their future despite the struggles and tribulations being encountered in life.