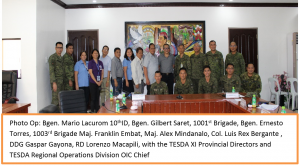 Through the leadership of Regional Director Engr. Lorenzo G. Macapili, DTE with the Deputy Director General in the Office of for Communities and Local Government Unit Services  Gaspar S. Gayona  among its TESDA XI provincial offices

The primary purpose of the meeting is to talk about livelihood training among Former Rebels (FR) in Davao region in partnership with TESDA XI as mandated in EO 70 of President Duterte Administration.

Captain Edson Abello of the 1001st Brigade presented that in his area of responsibility Tagum City, Kapalong, New Corella, Asuncion and San Isidro, all in Davao Del Norte province, there were Sixty five (65) FR’s from 2017 up to present surrendered and Three (3) have availed in TESDA training program namely Heavy Equipment Operation (Hydraulic Excavator). BGen. Ernesto C. Torres of 1003rd Brigade also presented that among Two Hundred Twenty Three (223) FR’s in his area of responsibility Davao City, Davao Del Norte Province and part of Bukidnon Province, One Hundred Eight (108) of them already received the Sixty Five Thousand Pesos (65, 000) cash assistance from the government and Forty Eight (48) of them are from Davao Del Norte Province , Twenty Seven (27) are from Municipality of Talaingod, still in Davao del Norte. He suggested that maybe thru partnership and linkages with TESDA, they can put up a training court to be the training ground for the former rebels so they can land a decent job after the training.

According to DDG Gaspar S. Gayona, TESDA will conduct area profiling before the training to determine what kind of training needs to be conducted. He further stressed that TESDA wanted not only training for the former rebels but a direction that after the training, they can use it and make a living out of the training.

Upon discussion, it was agreed that it is best that the AFP will come up with their own trainer, thus, the need for the Training of Trainers (TOT). AS per RD Macapili, TESDA will facilitate the training and AFP to submit the names of possible trainers to be trained. In this case, AFP can have their own trainer and assessor and can conduct training for the former rebels with the proposed training court which is to be determined. AFP is hopeful that this partnership, linkages and project with TESDA XI can be made possible through the help of National Agencies of which AFP will lobby with ARENA XI. 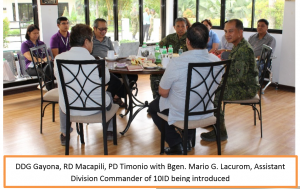 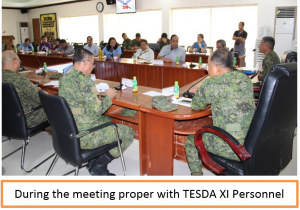