On  March 28, 2019, TESDA -Compostela Valley Provincial Office Arlyn S. Bandong, together with Sr. TESD Specialist Gerry S. Alcoser, took the lead in the conduct of profiling of the former rebels in the Municipality of Monkayo which came on the heels of SSg Ruben O. Fuentes’ visit at TESDA – ComVal to request for another skills training to be held inside the camp.

The main objective of the profiling is to conduct training need analysis for the former rebels and assist them in identifying their preferred skills training which will provide them economic and livelihood opportunities in the future.

As the team arrived in the camp, they were guided by 2Lt Kimberly Jean Lappao, CMO officer of Camp Kalaw, providing them information regarding the convergence  they had  with  TESDA  in previous trainings and that they are still very willing to implement the upcoming skills training. 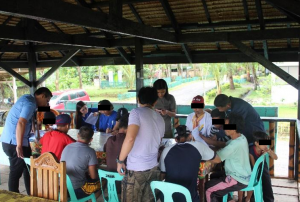 In her message, PD Arlyn Bandong explained the purpose of the visit and emphasized on the value of convergence efforts of various government agencies in the implementation of EO 70. She assured the FRs on the confidentiality of the profiling/Training Need Analysis form which will be accomplished by the participants. Sr. TESD Specialist Gerry Alcoser also stressed and elaborated the possible qualifications TESDA can provide in response to their needs.

At the end of the day, 20 out of 45 target participants accomplished the confidential form. The following chosen qualifications were identified; SMAW NC II, Driving NC II, and Animal Production NC II, The number of participants is expected to increase by the time the 25th IB is able to gather all the participants.

The profiling of the other 25 Former Rebels will be conducted early in April 2019. It is expected that the training program will start middle of April.