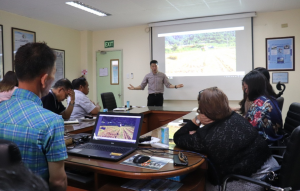 “Before, Nuclear was Power. Today, Food is Power”.

Thus shared by the Korean agricultural business tycoon Kiho Kim as he presented the promising rice farming technological adaptation in Mindanao during his visit at the RTC-KorPhil Davao on April 18, 2019.

Mr. Kiho charged rice, the staple food in South Korea and The Philippines, as the main source of power which feed the two people of the countries.

He likewise pointed out how the South Korean government managed to have a sustainable and optimized rice farming using state-of-the-art facilities from the land preparation, seed preparation, transplanting, irrigation, crop-care, harvesting, threshing, milling, among other rice machinery operations.

Mr. Kiho emphasized that South Korea and the Island of Mindanao are exactly the same in terms of land area and shared in details that Mindanao has more areas devoted to rice farming than South Korea which is geographically more mountainous.

He presented historical statistics between the two countries from the 1960 up to 2010 on the good volume of rice produced by South Korea with only one cropping every year due to climatic conditions which was found out to be better than the produce of the entire Philippines venturing 2-3 cropping annually.

He furthered that Philippines 50 years ago was the leading rice producer in the ASEAN region and opened with humor the irony of Philippines having the International Rice Research Institute (IRRI) but unfortunately is now left behind by neighboring countries in rice production.

Mr. Kiho then challenged that if South Korea could have those outcomes today, then Philippines likewise would achieve those in the future years, when the farms are properly mechanized. 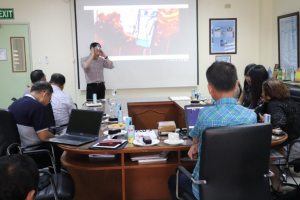 In the discussion, an audience raised the leading issue that pressed Filipinos in the adaptation of the Korean rice technology will be its price telling that Korean machines are more expensive than other machines like in China.

It was recalled that the procurement policy in the Philippines always favors the cheapest bidder.

Responding the situation, Mr. Kiho initially vowed to donate second hand agricultural machines in good conditions to be used in the Philippines, be it in a training or actual rice production.

The encounter of the Filipino farmers in Mindanao with the Korean machines, according to Mr. Kiho, will be an eye opener for the initial appreciation on its operation and long term outcome which is hoped to lead in the full adaptation of the said machines.

Mr. Kiho also told the group that he is very open for more discussions with them to realize the rice farming technological advancement in Mindanao, a technology that is long used in his country. 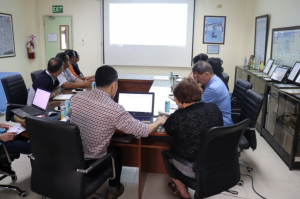 “I love to discuss anything…. everything! I will open my heart, brain and arm to welcome any discussion”, Mr. Kiho said adding that he left his business in South Korea to fulfill his mission on helping Mindanao achieve rice sufficiency.

TESDA ON ITS PART

TESDA XI RD Engr. Macapili thanked Mr. Kiho in its interesting presentation and echoed probable plans of the agency to help drum up agricultural programs in Region, and in Mindanao at large.

He said there will be more discussions with Mr. Kiho gathering first in the loop the government run technical-vocational schools, then the private-owned schools and finally tapping the industry partners to strategize ways on planning and implementing what has been presented.