The Technical Education and Skills Development Authority Region XI recently received a special recognition from the Eastern Mindanao Command (EastMinCom) for the agency’s contribution to peace initiatives in the region. 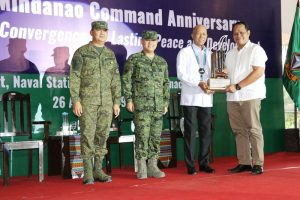 The recognition was awarded to EastMinCom’s active and valuable partners for the attainment of security, peace and sustainable development.

TESDA XI was recognized for its invaluable contribution in the overall peace initiatives of the Command by implementing a comprehensive “Training while Building” Scheme as part of the development intervention in conflict-affected and conflict vulnerable communities in Region 11.

Director Macapili expressed his gratitude to the Command headed by Lieutenant General Felimon T. Santos Jr. for the continuous and solid partnership that resulted to effective and efficient delivery of skills training programs.

He said such recognition is a manifestation that the agency is pouring its best efforts to implement quality skills training programs especially to the vulnerable sector including the Indigenous People and Cultural Communities, Drug Dependents/surrenderees, Former Rebel Returnees, and Persons Deprived of Liberty (PDLs).

Apart from the training for regular and special clients, TESDA also trains Killed-in-Action/Woundedin-Action (KIA-WIA) Armed Forces of the Philippines (AFP) and Philippine National Police (PNP) personnel and their families.

Training programs for soldiers to become certified trainers are also being conducted in order to produce more trainers who will train people in remote communities.

Director Macapili assured that the agency will continue to be an active catalyst to bring genuine change and sustainable development.