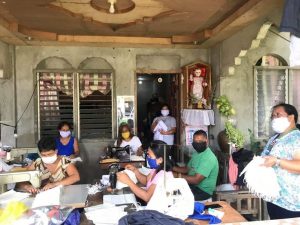 Amidst the COVID-19 outbreak, some of the busiest individuals have been the graduates of Dressmaking and Basic Sewing skills training programs which TESDA, the local government units (LGUs), and the provincial government of Davao de Oro have been implementing.  Because of these graduates, TESDA – Davao de Oro has been able to distribute thousands of reusable face masks beginning March 31, 2020 to the priority barangays of Davao de Oro identified by RTF- ELCAC XI and by TESDA – Central Office, and to some COVID – 19 frontliners, aside from the TESDA DdO personnel.

As the Covid-19 cases kept escalating, TESDA-DdO noted that while there have been initiatives extended to the frontliners such as the providers of health care, security and protection, and other major players in the country’s battle against the virus, there have been no reports on initiatives extended to the priority barangays identified for EO 70 intervention, thus TESDA, through the 25th, 60th, 66th, and 71st Infantry Battalions, distributed the masks to Mawab (Andili), Monkayo (San Isidro), Laak (Longganapan, Datu Davao), Montevista 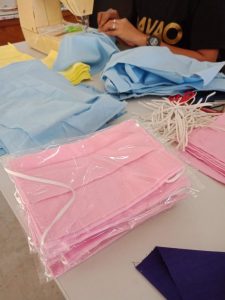 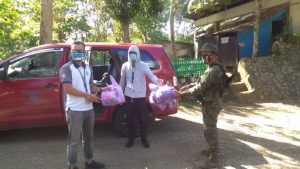 The production of reusable face masks for distribution to the priority barangays and to the frontliners is TESDA – DdO’s way of providing safety measures for the vulnerable and marginalized sectors in the country’s battle against the pandemic, as well as to the uniformed personnel requested by TESDA – DdO to distribute to the members of the priority barangays.  This arrangement was done because not only is the AFP always in contact with the beneficiaries, but for TESDA-DdO personnel to not add to the list of people possibly infected by the virus.